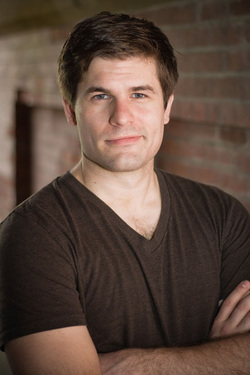 Adam Rini has worked in both theater and film in Phoenix, Los Angeles, and New York.

He is also founding member of the sketch comedy group BULLY MAMMOTH  who have had a successful stage show for 5 years running. It was with this group that he developed the character Dan Rodandan of his podcast DAN RODANDAN TEACHING ACTORS HOW TO ACT.

He is currently starring and has starred in several web series including VOYAGE TREKKERS and NORMALLY THIS WEIRD for Squishy Studios, as well as SMALL PIES and DELIVERIES for Story Bird films.  You can also hear his voice in the Kennedy Brothers' animated web series OUT THERE: DETECTIVES OF THE UNKNOWN and THE HOARDE. 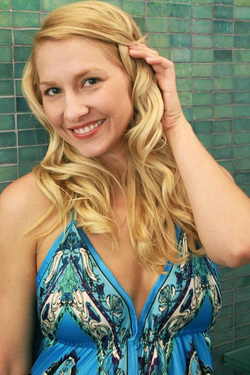 Local artist Gabrielle Van Buren is a Arizona State University graduate. While attending ASU she appeared in a variety of shows including HOUSE WHERE NOBODY LIVED, STOLEN CHILDREN, and ANGEL CITY.

She recently made her Phoenix Theatre Black Box debut in TRIBES.  She has also performed for Phoenix Theatre's New Works Festival in DEATH BITE and BREATHING TIME. Recently she's preformed in Arizona Women's Theatre WHAT YOU DON'T KNOW, and in the past starred in their production of BE AGGRESSIVE. Gabrielle traveled to Vancouver B.C. Canada to perform BREAKING THE SILENCE for The American Alliance of Theatre Education Conference.

Gabrielle's film credits include THE DOG, Directed by Josh Kasselman and featured in the Boulder City, Nevada's film festival. Other credits included ZOMBIE TEAM BUILDING, MASTERS OF DARING, and THE CONSTANT EPIPHANIES OF BILLY THE BLOOD DONOR directed by Nathan Blackwell. Gabrielle is the Front of House Manager for Phoenix Theatre, managing their Urban Oasis Wine Bar.

Gabrielle is a strong advocate for theatre education and currently teaches theatre and film classes to youth at Mesa Arts Center. 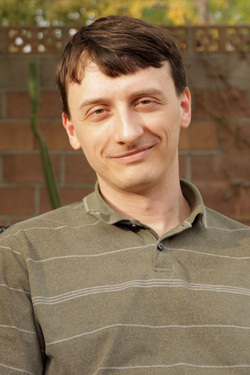 Logan Blackwell has been acting in his brother's films since he can remember, playing "Star Wars" and "Indiana Jones" in front of the camera.

It would seem not too much has changed since then, which Logan considers a good thing. Having studied theatre in college, he performed in several productions at Arizona State University and Phoenix College, he also wrote a play, THE CONSTANT EPIPHANIES OF BILLY THE BLOOD DONOR , which was later adapted into a feature film.

His currently working on a second play entitled "Project: Everything." 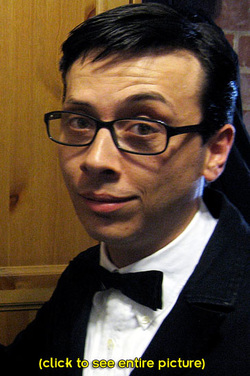 Brian Blackwell made his film debut at the tender age of five as an unwilling participant in his older brother Nathan's movies. Since then Brian has moved more behind the scenes in art and practical effects, creating the aliens and creatures used for VOYAGE TREKKERS. He looks forward to one day having his work painted over with CGI replacements as soon as his brother "jumps the shark" and goes all George Lucas. 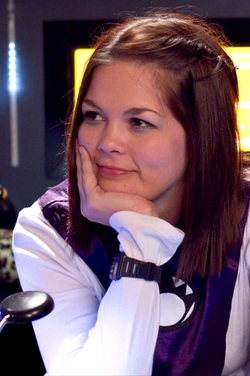 Jenna Leigh Scarborough is an aspiring writer and lover of all things squishy (studios that is). Born and raised in Arizona, she has been performing since the age of three. Starting out in local commercials and advertisements as well as street performances at Rawhide (a western theme park) where her father was the Director of Entertainment for 20 years.

She joined the cast of VOYAGE TREKKERS SEASON 2, but previously made an appearance as a spoiled blue alien Princess Tialon in last season's finale. She has won a handful of awards for her short films as a writer, director, producer and actor at the Film School @ SCC's annual festival, and at the Campus Movie Fest. She graduated from film school with an AAS with Distinction in Motion Picture/Television Production and Certificates of completion in both Film Production and Screenwriting.

Jenna is currently studying English Literature and American Sign Language and is looking forward to receiving her next degree soon. Yes, that's right… Ms. Scarborough is not an 8th grade girl… she is in fact an adult who has attended college. Jenna's next project is with us! She will be hosting the much anticipated (or so we told her) Voyage Trekkers Podcast beginning this April!. 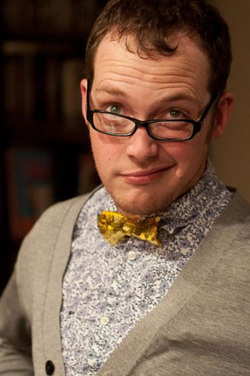 Ricky Brindley is an unlicensed dentist and comedian in Phoenix Arizona. When he isn't performing is unique form of frontier medicine, he is performing sketch comedy with Bully Mammoth with whom he is a founding member and been writer and performer since 2007. 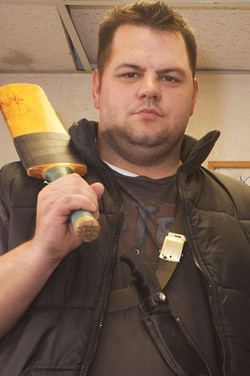 James Hoenscheidt graduated from Wichita State University in 2001 with
a Bachelor of Fine Arts Degree in Theater Performance. After collage
James began a career in stand up comedy. James has be entertaining
audiences in the Southwest with his comedy for the better part of a
decade. James has graced the stages of the Tempe Improv, Stand Up
Scottsdale, Stand Up Live, and won the inaugural Phoenix Comedy
Slamfest. James can also be seen in the Squishy Studios web-series
Normally This Weird. 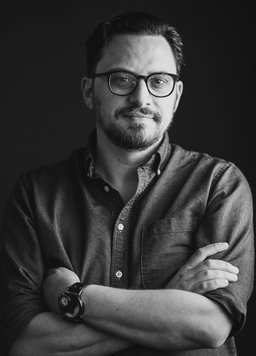 Phoenix-based filmmaker Nathan Blackwell began his career like many of his counterparts ... a manic eleven year-old running around with a camera, making terrible movies. He's since directed over forty short films, two low-budget feature films, four web series, and won about twenty-five awards for filmmaking (he's having trouble remembering the exact number actually, so who knows).

He was nominated for the Phoenix New Times Big Brain Award in Film & Video, and his screenplay for TRANSGALACTIC ZOO was one of ten finalists in Final Draft's Big Break. His work has been featured on the Ain't It Cool News website, LA Weekly, and MovieMaker Magazine. His only non-film hobby is cooking, and really only pasta to be honest. 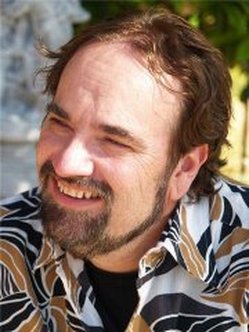 Tray Goodman is a veteran TV and film, having earned both local and nation awards. He's worked with ABC, CNN, FOX, ESPN, MTV, E!, History Channel and TV Shows including NBC's "The Biggest Loser." He's produced two full length feature films that are distributed worldwide, and several TV shows, such as THE TRAIN TRACKS, INSIDE CREATIVE MINDS, COOL IN YOUR ZIP, and GREAT FOOD GOOD NEIGHBORS. He's directed over 5000 multi-cam live events and live to tape productions in all aspects of video programming. With sports being one of Tray's passions, he has been involved in over 1000 live sporting events as a field cameraman, including 10 plus years with the Arizona Diamondbacks, Arizona Cardinals, Phoenix Suns, Phoenix Coyotes and Phoenix Roadrunners Hockey Club. 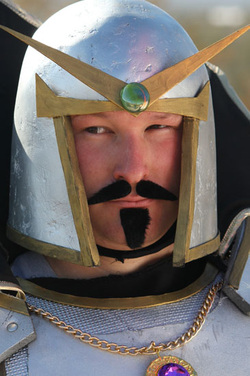 Craig Curtis is one of the founding members of Squishy Studios, participating as both writer and actor. He is also a published author, including the novels ELEFANTE BIANCO and the fantasy/adventure novel, THE OTHER SIDE OF THE GATE. In addition to his role on the writing staff of VOYAGE TREKKERS, he is also featured onscreen in the parts of General Kang and the robot I.N.F.O.  In his leisure time, he refurbishes antique zeppelins. 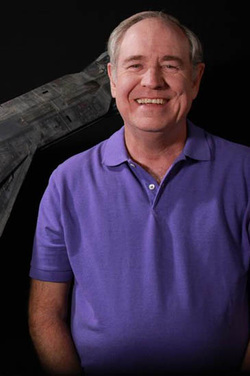 David Stipes is a filmmaker, visual effects consultant, artist and educator working in Phoenix, Arizona. For over thirty years David worked on scores of commercials, T.V and film projects, winning a number of awards for his efforts. He operated his own visual effects production company full time for over twelve years and managed up to 20 employees at times. In 1992 David closed his studio to join the STAR TREK: THE NEXT GENERATION team where he received two Emmy Awards. His television credits include STAR TREK: THE NEXT GENERATION, STAR TREK: VOYAGER, STAR TREK: DEEP SPACE NINE, BATTLESTAR GALACTICA (the original), V, and “V: THE FINAL BATTLE, BUCK ROGERS IN THE 25th CENTURY, and the feature films THE ICE PIRATES and REAL GENIUS.

David moved to Phoenix in 1999 and is a full time instructor at The Art Institute of Phoenix.  Moving to Arizona afforded him the opportunity to have a closer relationship with his son, Nathan Stipes, who is also involved on VOYAGE TREKKERS He also does Life Seal counseling through Logos Center, the church he attends in Scottsdale. David is a member of the Visual Effects Society (VES) and has done visual effects consultation, supervision, design and production on the recent web series, NORMALLY THIS WEIRD, VOYAGE TREKKERS, and MANTECOZA. 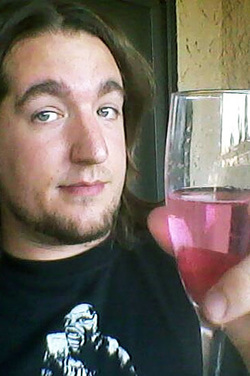 Nathan Stipes was born into a life of film, being the son of Hollywood visual effects veteran David Stipes. At a young age, his mother carted him off to the heat of Arizona where he has since remained. After attending the film school at Scottsdale Community College, he taught himself (with a little help from his dad) the basics of special effects makeup and prop making. It was at SCC where Nathan Stipes met Nathan Blackwell and was soon brought on board for art and SFX makeup on many of Nathan Blackwell's projects including ZOMBIE TEAM BUILDING, NORMALLY THIS WEIRD, LOGAN MUST MAKE STAR WARS, and  VOYAGE TREKKERS. 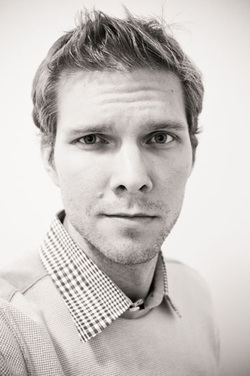 Michael Markowski is fully qualified to watch movies and cartoons. Although he holds a degree in film, his life is focused on music and his compositions are actively performed around the world. His work can also be heard in short musicals, like Conan: The Musical which aired in a bit on NBC’s Late Night with Conan O’Brien, writing techno/pop songs, one of which featured Canadian actor John Dunsworth from Trailer Park Boys fame, composing short jingles and comedic songs for the sketch comedy troupe, Bully Mammoth, and is proud to be the composer for the sci-fi comedic web series, Voyage Trekkers.